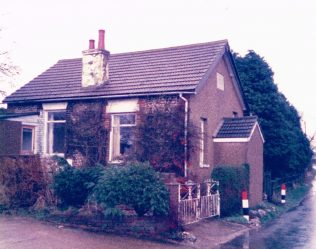 Bladbean Primitive Methodist chapel is two miles north of Elham and north west of Folkestone.  It was opened in 1864 but by 1884 had transferred its Methodist allegiance to the Bible Christian branch of the family.

At the time of the photograph it had been converted to a house – La Chapelle.

The laying of the foundation stone is recorded in the Primitive Methodist magazine by D Kendall.

“Chapel Opening, Bladbin, Canterbury Circuit.—In 1854 Bladbin was missioned by this station. During the past ten years the society has been subject to much inconvenience for want of a proper place in which to worship God, but through the goodness of God a better day in this respect has dawned upon us.

Mr. M. Stupple has kindly given us a piece of ground. We commenced building operations on the 25th of April. A sermon was preached by Mr. Grant, and the memorial stones were laid by W. T. Plommer, Esq , and J. Plommer, Esq., of Broughton.

A tea and public meeting followed, which were well at tended and sustained. On July 3rd the chapel was opened. The writer officiated in the morning, and in the afternoon and evening excellent sermons were delivered by Mrs. J. Plommer. Monday, at 3 o’clock, G. Plashman, Esq., Wesleyan, of Dover, preached. Tea was provided for the friends, and about 180 partook thereof. Afterwards we had a public meeting. The services throughout were good.