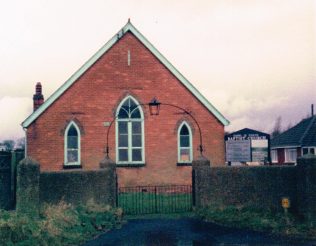 Capel-le-Ferne Primitive Methodist chapel, north east of Folkestone, was opened in 1870.   Keith Guyler, in his 1986 photograph, identified it as the Baptist chapel on Capel Street CT18 7LY.   On Google Street View in July 2009 that building was still in use as a Baptist chapel. However, see the comments below for more of the story.

The Primitive Methodist magazine for June 1857 contains an account by Chas. Garton Honor of the opening of a preaching room at Caple-le -Fern (sic) in the Deal and Dover Mission. The village was first missioned in September 1856 and they soon obtained “a substantial and commodious outbuilding” which they fitted up with a pulpit, a small gallery and seats for 70 people. The opening sermons were preached by Mr Honor on October 26th 1856. A society of six people was formed.

On Good Friday, April 10th 1857 an initiative to free the chapel from debt and give the society momentum involved sermons by Mrs Copelin and Rev N Broadway, the superintendent, and a tea meeting for 60-70.

The account refers to “difficulties of an unusual and perplexing character” – but unfortunately doesn’t tell us what they were!

The opening of the chapel that replaced the preaching room is recorded in the 1871 Primitive Methodist magazine by W Bickerdike. The foundation stone was laid on August 3rd 1870 and the chapel opened just eight weeks later on September 27th 1870 when Rev R Thompson was the preacher.

Thanks to Malcolm Gladwin for locating the chapel in Satmar. The Ordnance Survey maps of 1873-5 and 1907 both name the chapel in Satmar, next to Satmar Cottages. By 1937-8 the chapel is no longer named but the building still exists and by 1957 it has been demolished.  On the 1873-5 map, there were very few buildings on Capel Street itself.