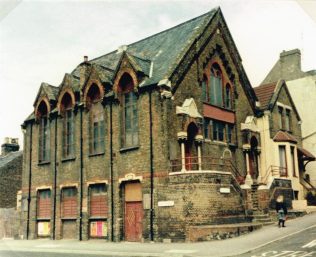 Dane Hill Primitive Methodist chapel in Margate was opened in 1871 but was sold by 1947.  At the time of Keith Guyler’s photograph in 1986 it had become  a carpentry workshop; Damaged in storm in the early 1990s, it was partly demolished.  The site was sold by auction in April 1999 with planning permission for 6 flats.  On Google Street View in 2014 it is called Chapel Court, with its frontage on King Street.