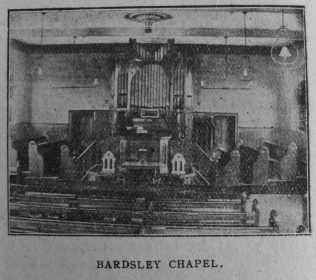 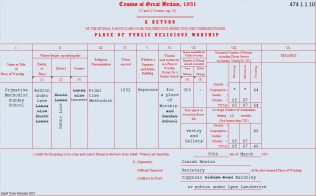 Bardsley was the site of a” notable camp meeting  on May 19th 1822. The preachers came from Manchester … 14,000 people or more were there, Walter Carter was in charge and five praying companies were appointed to link up the preaching periods. Two other companies took up a position at such a distance as to arrange for continuous praying during the whole of the time.”

The first chapel was opened in 1832. It held 300 and the :return from the Primitive Methodist chapel to the 1851 Census of Places of Public Religious worship reports that on Census Sunday 64 people attended the single service in the evening. There was a thriving Sunday school with 85 scholars in the morning and 97in the afternoon.. The return was completed by the secretary, Isaiah Newton.

There’s an account in the 1865 Primitive Methodist magazine of the opening of a new chapel at Bardsley.

The church continues to witness in 2019. What does it look like now?

“Chapel Opening at Bardsley, Oldham 2nd Circuit.—In the year 1832 a small chapel was erected at Bardsley, which cost £176. William Taylor, and those who laboured with him, did a good work in their day, and the house which they reared has been the birthplace of many souls. Repeated efforts have been made to clear off the debt on the old premises, which has been done ; and during the time you laboured here, Mr. Editor, an additional plot of land was bought, adjoining the old site, and a few months ago the corner stone of a second chapel was laid.

The ceremony was performed by Jonah Harrop, Esq. He passed a very pleasing eulogy on the character and labours of our people here, and promised to head the subscription list with £20. Thanks were given to him, and a beautiful silver trowel. The work has gone on very rapidly, and the opening services were held on September 18th and 25th. Sermons were preached on the occasion by Revs. J. Eastwood, R. Williams, J. Turner, T. Marlor, Esq., and Miss Buck, and the collections amounted to £31 Is. 7d., which with subscriptions and other efforts previously made, will amount to over one-third of the total cost.

The chapel is 49 feet 6 inches by 34 feet 6 inches ; 15 feet from floor to ceiling ; it is built of brick, with stone basement in front, neatly finished. There are an entrance porch in the centre of the side, and two good vestries at one end ; one-half of the chapel is pewed, each pew rising six inches, the other half being fitted up with neat forms with easy backs.

A platform is provided for the preacher 11 feet by six feet. The wood work is all stained and varnished ; the chapel and vestries are well lighted with gas ; and the total cost will be about £450. All the pews are let, and there is every prospect of much good being done. The value of our connexional property at Bardsley will now be £700. J. Eastwood.”