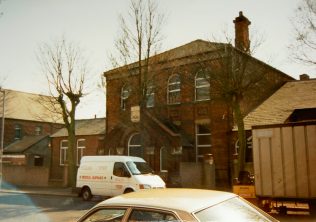 Bethel was opened in 1874. It is now known as Hartington Street Methodist Church.

To the left of the Bethel chapel is another chapel. This was the original Wesleyan Chapel also built in 1874, the same time as the Primitive chapel. When the Wesleyans opened the Kings Hall in 1907 their former chapel was converted into ancillary accommodation and became known as the King’s Hall Lesser Hall.  The cycle was completed when the former Primitive and Wesleyan congregations merged around 1951 in the ex-Primitive building.