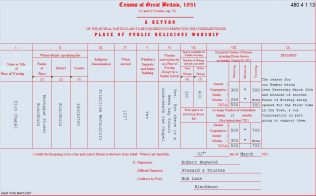 “— Our society in this town, has long laboured under inconveniences owing to the circumscribed state of the place in which they worshipped.

Often have they beheld, with painful emotions, many of those who wished to join with them in the services of the sanctuary, returning back not being able to gain admittance.  This caused the society to make their requests known unto God by prayer and supplication; and while they cried, “Enlarge the place of thy tent, and stretch forth the curtains of thy habitations,” God heard their prayers, and bestowed upon them the desire of their hearts; for at length, by their united exertions under his divine blessing, they succeeded in erecting A Primitive Methodist Chapel.  During the time it was in building, it seemed to attract great attention from the inhabitants of the town ; and when the day was nearly arrived on which it wan to be opened, increasing excitement was manifest.  We commenced the opening services Dec. 17, 1837, when Bro. John Garner from Sheffield, preached morning and evening, and G. Kidd in the afternoon.  The audiences were numerous and respectable, – the Unction from the Holy One rested upon the people, and good was done.

The Sunday following, the opening services were resumed, when Bro. G. W. Armitage from Preston preached morning and afternoon, and Bro. J. Verity at night.  The day was very unfavourable, but the congregations were good, and at night the chapel was crowded to excess.  The opening collections realized the sum of forty-seven pounds.

Two hundred pounds had been previously begged towards its erection; and considering the financial state of the town and neighbourhood generally, we are led to say, “What hath God wrought!”  Truly, “the silver and the gold are the Lord’s, and, they that trust in him shall never be confounded.”  The chapel is in a pleasant situation, is well arranged, and very commodious.  It is fifteen yards long, fourteen wide, and thirty feet from the floor to the ceiling.  It is galleried on two sides, and front—is pewed up the centre of the bottom, and has three hundred free sittings.  It will accommodate seven hundred comfortably. The greater part of the pews are let.

Underneath the chapel is the Sunday school, in which four hundred children can receive Christian instruction, calculated to make them “wise unto salvation.”  The whole is in good circumstances.  “This is the Lord’s doings, and it is marvellous in our eyes.”

The society have exerted themselves in a praise-worthy manner; and the inhabitants of Blackburn, and its vicinity, have manifested a generous and Christian-like spirit towards us, for which we tender our sincere and united thanks.  We also acknowledge the hand-rent, generously relinquished by William Fieldon, Esq. M. P., on whose premises the chapel is built.  Five pounds from Wm. Turner Esq. M. P, and a clock from Mr. Fell, clock and watch maker of this town, value five pounds.  May the doctrines of the bible, as taught by the Primitive Methodists, ever be inculcated therein ; and may the Great Head of the church crown the same with his special blessing; so that souls may be born in it, who will give unto God and the Lamb, through the everlasting ages of eternity, ceaseless and triumphant, praise.  Amen. Halleluia.

The return from the Primitive Methodist chapel to the 1851 Census of Places of Public Religious worship confirms the date of erection as 1837 and shows that the chapel was thriving.  Morning attendances averaged 500 and evening attendance 700.  They were each 200 down on Census Sunday as some members were supporting a new chapel opening on that day. There was a day school underneath the chapel.

There was also a morning Sunday school with a regular 300 scholars.

The chapel is shown on later Ordnance Survey maps on the eastern wide of Montague Street, just south of its junction with Fielden Street.  Montague Street still exists but has been completely redeveloped.