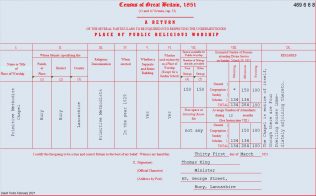 zoom
Bury: return from the Primitive Methodist chapel to the 1851 Census of Places of Public Religious worship. Return no: 469 6 6 8
transcribed by David Tonks 2021

The original chapel which measured 30′(w) x 42′(l) had dry rot so the Trustees agreed to take off the roof, raise the walls, put in a gallery and build three cottages.

The best information about the original date for the chapel comes from its Return to the 1851 Census of Places of Public Religious worship. Thomas King, the minister of 68 George Street, tells us that the chapel was erected in 1829 and seated 300.  On Census Sunday there were 150 worshippers in the afternoon and 100 in the evening, which reflected the average attendance.  The morning and afternoon Sunday schools each attracted 134 scholars.

The Gen UKI website shows a later Primitive Methodist chapel in Walmersley Road founded before 1895. The society originally worshipped in a building on the west side of Walmersley Road – perhaps the 1833 chapel – opposite St Marks Square. When the New Jerusalem Church left its premises slightly closer to the town centre, the Primitive Methodists acquired them for use as a Sunday School. Later the Prim chapel was sold for use as a hat factory and the NJ building was used for services. Both buildings are now demolished.