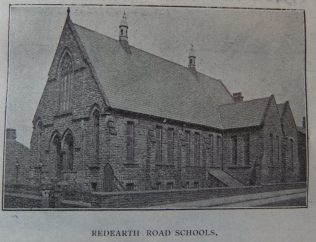 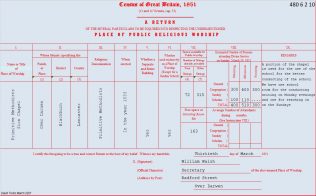 zoom
Darwen: return from the Primitive Methodist chapel to the 1851 Census of Places of Public Religious worship. Return no: 480 6 2 10
transcribed by David Tonks 2021

Primitive Methodism started in Darwen in 1819. Until 1825, services were held in the open-air, at the bottom of Bury Fold Lane, before a room above a stable was acquired on Water Street.

In 1828 Mr Greenway Esq gave land for a chapel and a ‘burying place’ but trouble with raising the money initially delayed the work.

The return from Darwin Primitive Methodist chapel to the 1851 Census of Places of Public Religious worship confirms the opening date of 1833 and names the chapel Zion. On Census Sunday there were three packed services: 300 attended the morning and evening and 400 came in the afternoon – rather more than the 130 capacity quoted in the magazine article.  What’s the story here?

There was also a Sunday school with 100 scholars attending in the morning and 110 in the afternoon.  The return was completed by William Walsh, the secretary , of Radford Street, Over Darwen.

An unusual but fascinating source of more information is the Archaeological Post-Excavation Assessment Report for Blackburn with Darwen Borough Council conducted as part of the redevelopment of the site, published in 2011. You can read that report at the link below. It reports that the chapel was later enlarged and then replaced.

The Christian Messenger confirms this, saying “During the excellent ministry of the Rev. J. Morton, the handsome church and commodious Sunday school at Redearth Road was erected at a cost of £3,931, and opened in 1878; ”  It also tells us “Redearth Road trustees have put a magnificent three-manual organ, automatically blown, in their church, at a cost of over £700,”

There is more information about the opening of the chapel and the development of Primitive Methodism in Darwen here.

Thanks to David Foster, who attended Redearth Road as a boy, for confirmation that the chapel was demolished in 1972.  An 11-18 Academy was built on the site and it included the old graveyard.  The council commissioned an archaeological survey before the school was built and the bodies were reinterned at the local cemetery with an appropriate memorial.