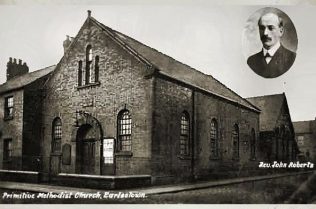 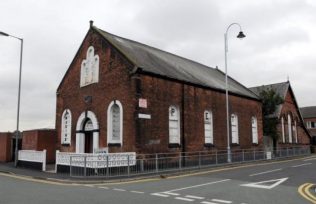 Primitive Methodism  was introduced into Earlestown by John Clarke who had been transferred, along with others, to the Viaduct Works from Salford. On arriving in the town in October 1853 he found many zealous and enthusiastic friends and decided to hold Camp Meetings in the open-air.

A Society was formed and as it grew they moved to another house in Bridge Street which had been formed from the old Workhouse, but the room quickly became too small to accommodate the number of worshippers and it was decided to ask the Lord of the Manor to lease a plot of land on which to build a little Chapel.

The request was turned down flat, but, undaunted, a deputation was appointed to see Lord Newton at Lyme Park, Disley who, after much pleading, granted a piece of land in Leigh Street, on condition that it was designed as two cottages with a large room over the lower rooms.

The offer was gladly accepted and the members quickly set to work. Joseph Johnson drew the plans, other members with pick and spade dug the foundations and a number of wagon makers from the Viaduct Works did most of the woodwork. The building was duly opened in 1863.

After a few years had elapsed since the ‘Prims’ became the happy possessors of a meeting place, they soon found that larger premises were required and in 1872 a new Chapel, adjoining the cottages, was opened with further extensions for the Sunday School which was opened in 1884.

In 1932 the Wesleyan, Primitive and United Methodist Churches nationally joined together to form The Methodist Church. In 1967 the two Methodist Societies in Earlestown amalgamated and worshipped as one Society in the Cross Lane Chapel. Sadly the 1880 Chapel was demolished a few years ago. It was replaced with a single story building on the same site it is now a united cause along with URC church.

COUNCILLORS voted unanimously in favour of proposals to turn a pet food store into a pub owned by national chain JD Wetherspoon.

The planning committee in St Helens gave the green light to the transformation of the Nadin Pet Supplies building in Earlestown.

Speaking at the hearing, case officer Alan Kilroe stated the venture received 15 letters of support.
One read: “This is a positive move forward for Earlestown and could open it up to further development and modernisation.

“Also Wetherspoon will keep the original character of the building and not detract from it unlike other developments that have recently been allowed in the Newton-le-Willows area which have bulldozed local sites of architectural and historical importance.”

Objections related to worries over the impact of parking, anti-social behaviour and noise.
Mr Kilroe concluded: “It is not considered that this will have a harmful impact on residents and the proposal will not have an impact on the highway network.”

Environmental health stated they had been assured that amplified music does not feature in the proposal.

The proposals were given the green light by a unanimous vote. Cllr Richard McCauley said: “I think it would help that part of the borough. It’s a good use for that part of the building to turn it into something people will use.”

Councillor Quinn, while supporting the plans, did raise concern over the possibility of smokers being drawn to the front of the building although no objection from environmental health has been made.

The pub chain already has two pubs in St Helens town centre, The Running Horses and The Glass House.