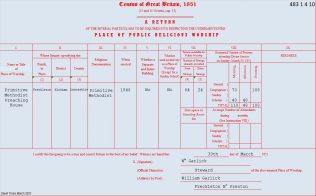 zoom
Freckleton: return from the Primitive Methodist preaching place to the 1851 Census of Places of Public Religious worship. Return no: 483 1 4 10
transcribed by David Tonks 2021

The return from the Primitive Methodist society to the 1851 Census of Places of Public Religious worship showed that they were meeting in a preaching place rather than a specially built chapel.  It was erected in 1848 and held 108 people, mainly in free seats.  On Census Sunday it was full up with 108 attendees in the evening and 70 in the morning.  There ws also a Sunday school of 40 scholars in the morning and 48 in the afternoon.

The return was completed by William Garlick, the steward.

In 1861 they laid the foundation stones or their first chapel., as described in the Primitive Methodist magazine:

“On Monday, November 4th, 1861, the foundation-stone of a Primitive Methodist chapel, now in course of erection, was laid at Freckleton, Preston Circuit, by Mr. John Lamb, of Preston, who delivered an appropriate address.

After the laying of the stone, the Rev. W. Rowe, of Manchester, delivered an address. The company then retired to the old room, and about 250 people sat down to a comfortable tea, which was partly gratuitous. A public-meeting was held after, over which Mr. W.Sowerbutts, of Preston, presided, who opened the meeting with a powerful address, which was followed by addresses from the Revs.W. Knox, of Eirkham (Independent), D. Peacock, of Derby (Baptist), W. Rowe, R. Kaye, J. Graham, E. Stubbs, and Messrs. J.Lamb, R. Dalton, and J. Whittle.

The room was crowded. The collections, donations, and profits of the tea-meeting amounted to £26 19s.2d.

Thirty years later the 1891 Primitive Methodist magazine tells us of the laying of foundation stones for a replacement chapel, by then in the Preston Third circuit.  The 1861 chapel had become “inconvenient”. The 1892 magazine reports the opening.

The magazine comments that “The progress of this church from the thatched cottage in Lower Road, through the upper room of the old factory, and the small chapel which now becomes the schoolroom, to the sanctuary just opened is full of interest”.

The chapel closed in 1966 and has been demolished.