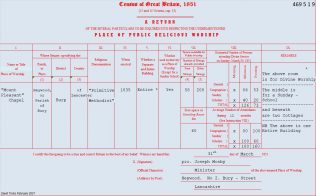 zoom
Heywood: return from the Primitive Methodist chapel to the 1851 Census of Places of Public Religious worship. Return no: 469 5 1 9
transcribed by David Tonks 2021

In 1828 a small Primitive Methodist society was established in Heywood-in-Heap and in 1829 Messrs I & R Kershaw paid for a Sunday school to be built.

“A large and commodious chapel and school” were opened with services on 20/12/1835 and 25/12/1835. Preachers on the  Sunday were James and Hugh Bourne and on Christmas Day Messrs Alcock and Tillotson.

The return to the 1851 Census of places of Public Religious Worship tells us that the chapel seated 266 with room for another 60 standing. Average afternoon attendance was 80 with 100 in the evenings: the Sunday school had 100 scholars in the afternoon and, unusually, 60 in the evening.

The Return was completed on behalf of the Minister, Rev Joseph Mosby of 2 Bury Street.

The premises in Bank Street in turn became inadequate and a site was secured in the main street, Bridge Street. The foundation stones were laid on Saturday, May 20th, 1871,

More detail and further developments in the circuit can be seen in this article from the Christian Messenger.

The chapel is marked on the 1851 Ordnance Survey 1:1500 plan on Bank Street and labelled “Mount Pleasant Primitive Methodist chapel”. By the 1891 map, there is a flannelette works on the site.