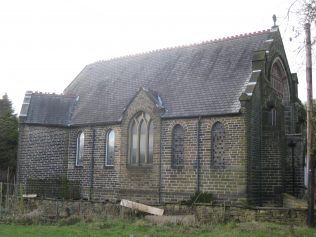 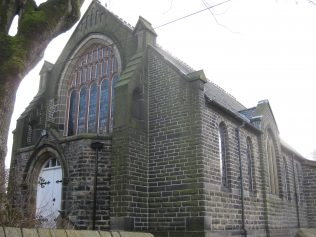 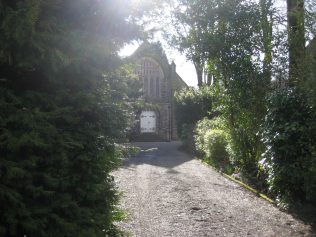 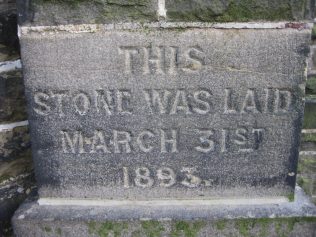 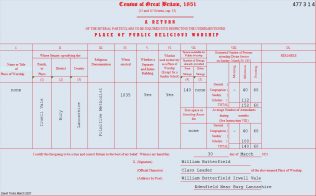 zoom
Irwell Vale: return from the Primitive Methodist chapel to the 1851 Census of Places of Public Religious worship. Return no: 477 3 1 4
transcribed by David Tonks 2021

Irwell Vale is a beautiful little hamlet on the fringe of Rossendale. It came into the present Rossendale Circuit in the summer of 2011. In the 19th century they had a cotton mill, a woollen mill and a dye works in a village whose total population in 1851 was a mere 162. Church membership at the time was 38 and the congregation met originally in an old woollen mill where in 1846 diarist Moses Heap observed that the heat at the PM Charity Sermons was so stifling that jugs of ale, pop and water were passed around the congregation to cool folk down.

Their first chapel was built in 1853 but when it became too small and membership was up to 60 the foundation stones of the present stone-built Gothic structure were laid on Good Friday 31st March 1893, one by W.J. Porritt and another by Haslingden’s first mayor Thomas Bewley Hamilton. The total cost of the new chapel was £1925.00. The original premises are now a row of three cottages named Chapel Terrace.

In 2007, when the church had 18 members, a bid was made for funding to make the chapel a community hub. The plan was to remove the fixed pews and transform it into a multi-purpose building. The minister at the time, the Rev Christine Leech said, ‘Our primary purpose is to open the building for use by the people in the villages of Irwell Vale and Lumb to create a sense of community because it’s the only public building.’

The winter of 2015 saw extensive flooding in Irwell Vale and sadly the chapel did not escape.

In March 2016 the chapel is still open for worship.

Photos and additional information added in 2016 by E & R Pearce.