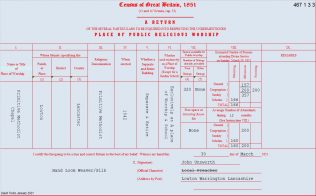 zoom
Lowton: return from the Primitive Methodist chapel to the 1851 Census of Places of Public Religious worship. Return no: 467 1 3 3
provided by David Tonks 2021

The first of three Chapels opened in 1842. You can find out more by following this link.

Opening services took place on Sunday, June 12th, 1842 when Mr T. Unsworth preached in the afternoon, and Mr R. Kaye in the evening. Raising the money for the chapel was not easy.  “Some lime was carted and paid for, but the person who had sold the trustees bricks would not allow any to be delivered without receiving for them ready money” – not an unreasonable position!  The chapel was an immediate success and a thriving Sunday school was quickly established.

The trustees wanted to extend the chapel, but the editor of the magazine counselled against this. “We advise the friends at Lowton not to enlarge their chapel unless they can, beg all the cost, besides reducing the present debt.  Seasons of mighty out-pourings of the Spirit are not generally the times for enlarging chapels, but rather for converting sinners.”