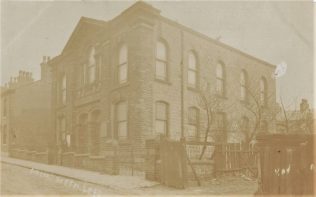 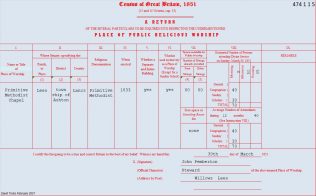 zoom
Lees: return from the Primitive Methodist chapel to the 1851 Census of Places of Public Religious worship. Return no: 474 1 1 5
transcribed by David Tonks 2021

The opening of Lees Primitive Methodist chapel is mentioned in the Primitive Methodist magazine of 1834.  Whilst the account does not have the detail normally found in such entries – such as when the chapel was opened, who the preachers were, how much money was still to be raised and who wrote the article – it does tell us the chapel had Welsh blue slate for the roof and that half the room was used for the Sunday school.  It measured 27′(w) x 28’6″ (l) x 15′(h).

The return from the Primitive Methodist chapel to the 1851 Census of Places of Public Religious worship tells us that the chapel accommodated 160 and the average attendance for the single service held in the morning was 40 adults and 30 scholars in the Sunday school. The return was completed by the steward, John Pemberton.

The former Primitive Methodist chapel still stands on Princess Street (Google Street View July 2012) when it was used as a nursery.  The Churches of Britain and Ireland website says that the chapel was first built in 1822 and closed in 1965. It looks a later building so there is a story here.