what to do when the roof falls in 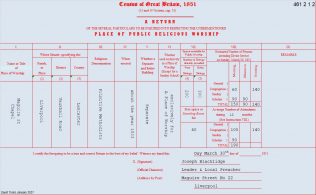 zoom
Liverpool, Maguire St.: return from the Primitive Methodist chapel to the 1851 Census of Places of Public Religious worship. Return no: 461 2 1 2
provided by David Tonks 2021

The Primitive Methodist magazine account of the rebuilding of Maguire Street chapel in Liverpool gives some idea of how difficult it was for the poorly paid working class Prims to carry the cost of building maintenance at the same time as trying to support basic living needs.

What happened to this chapel?  Where was Maguire Street?  Google maps does not recognise it.

“Liverpool First Station, Maguire Street Chapel.—Dear Editor,—We have just concluded a special and very successful effort for the relief and complete renovation of our Maguire-street Chapel.

This chapel has been occupied by our people for nearly forty years, and has been the birth place of many souls. Latterly the neighbourhood has become the abode of the lower classes of society ; and the chapel has seemed to partake of the general deterioration. The roof had given way, and considerable portions of the ceiling had fallen down. The chapel was in other respects very much dilapidated, and required a thorough repair.

Under these circumstances, at the close of 1862, the mortgagee demanded the payment of the mortgage. What to do in the matter we scarcely knew. To obtain another mortgage while the chapel was so much out of repair was out of the question. To make an effort for the reduction of the debt was a very difficult mutter, for we had just concluded an effort on behalf of Croston Street Chapel, by which the debt was reduced upwards of £200. We were then begging for the distressed operatives, on behalf of whom we raised nearly £70.

Some thought that as all the money we were likely to raise would be required for alterations the chapel had better be sold, and negotiations were entered into for this purpose, but only one bidder appeared in the market, and he refused to give as much for it as would pay the mortgagee.

The people then set to work in earnest. Begging books and cards were circulated. Our esteemed friend Mr. Boote gave us the benefit of his influence and aid, and I may say that mainly by his assistance the chapel has been placed in easy circumstances. His son, Mr. Joseph Boote, begged the noble sum of £42. Towards this sum, Mr. Boote contributed £5 ; T. B. Horsfall, Esq., M.P., £5 ; J. C. Ewart, Esq., M.P., i.3 3s.; C. Turner, Esq., M.P., £3; and G. Moffatt, Esq., M.P., £1. The collectors generally did well. Mr. G. Johnson collected nearly £11 including his own donation, and Mrs. High, who has worshipped in the chapel for thirty-five years, collected upwards of £8. Mr. T. Heaton contributed £5.

Application was made to the Committee of the Connexional Chapel Fund, and a promise of £30 was generously given on condition that we raised £120. In the spring of this year, the books &c. were called in, and to the great joy of our Maguire street friends we were able to comply with the conditions of the committee. The debt was reduced £150 and the mortgagee consented to allow the other portion to remain during his life.

A tea party was held to celebrate our success, and at the meeting afterwards it was resolved to put the chapel in good condition, and upwards of £20 were promised for this purpose. Different plans were suggested, but eventually those of Mr. Boote were adopted. These plans comprehended among other things the re-roofing of the chapel, taking down the ceiling, casing and staining the beams, painting the walls and all the wood work in the chapel, the insertion of an excellent rostrum in place of the old pulpit, and the enlargement of the school-room underneath the chapel to double its former size. These plans have been carried out in a manner which reflects great credit on all concerned.

The chapel was re-opened on Sunday, November 29th, 1863, when three sermons were preached, two by the Rev. T. Garner, and one by the Rev. J. Gibson. On the following day a tea party was held in the school-room, when about 400 sat down to a comfortable repast. The provisions were gratuitously supplied, about 30 trays at 10s. each having been given. The total cost of the alterations is about £125, towards which we have raised about £70, including a donation of £15 from G. Pennell, Esq. To God be all the praise.

While these alterations have been going on, our Rathbone-street friends have inserted a new vestry, and painted and beautified the chapel at an expense of upwards of £80, nearly the whole of which has been raised, and at Croston street an excellent organ has been obtained without involving the trustees in any debt. R. Arnfield.”