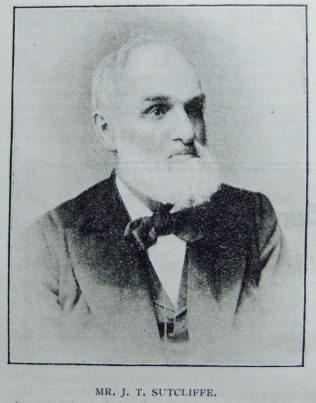 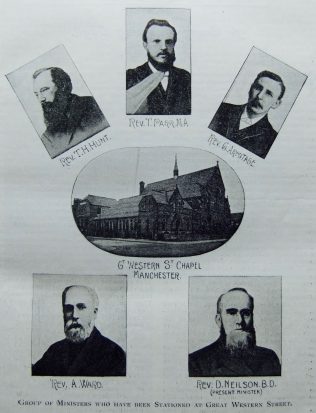 Transcription of Article in the Christian Messenger by D.N. (Rev. Daniel Neilson)

The city of Manchester has rapidly extended its borders by making invasions on the rural districts which surround it. Within the memory of living residents in Moss Side area, the place now covered with dwelling-houses was a quiet resort for wearied workers who sought rest among the green fields of rural Manchester. That phase of life is now gone, and thousands of inhabitants now live where formerly there was nothing but quiet lanes and pasture meadows. The new order of things arrested the attention of our earnest workers in Upper Moss Lane Church, and the problem of how to meet the religious needs of the outer district presented itself. The passion of evangelism was strong in the hearts of our church leaders, and they determined to follow the flowing tide of life.

In the year 1876 Mr. George Unsworth built a mission-hall and rented it to our people for services, and thus sprang into existence the germ of the now flourishing church at Great Western Street.

In 1878 a fine pile of buildings was erected, which has since been extended by the addition of school-room, lecture-hall, and class-rooms. The church accommodates 850 persons, the school-room provides for 350 scholars, the lecture hall holds 150, while the class-rooms provide for about 250 scholars. The premises are most tasteful and complete. A sense of repose pervades the building, and worshippers find a joy in the sanctuary. Every part of the building is beautifully decorated and lit up with the electric light. Pictures are hung in every room, which have been selected by the society steward, Mr. T.L. Sutcliffe, and presented by him to the trustees.

It was a great act of courage and faith that led the pioneers of the church to attempt so much. Faint-hearted men would have faltered in the presence of the financial burdens which the undertaking involved. Buildings which cost over £8,000 needed faith to erect, and that was not wanting in those that undertook the mission. The story of self-sacrifice which the Great Western Street people have made ought not to pass into oblivion. It makes one’s blood flow more freely through the veins to remember the noble deeds they have done. How Mr. Unsworth inspired others with his own faith and set an example of unremitting toil; how Mr. and Mrs. Beulah came to the rescue when the financial strain was heaviest, with handsome donations of money; how Mr. and Mrs. Sutcliffe, forgetful of their own comforts, gave of their limited store of money, and laboured with their family to meet the church’s need; how valuable have been the services of Mr. Joshua Longden, Mr. John Machin, and Mr. R.S. Catling; these things, when known, declare that there is still faith in the Church and faith that can endure the heaviest strain.

After years of bazaar-holding, monthly specials, and all kinds of ingenuities for raising money, on the 17th October, 1900, the Rev. D. Neilson, present pastor of the church, rose, in the midst of a crowded school-room, to declare that the last penny of the money required to payoff the debt on the buildings had been raised. It was a memorable night. Tears rained down the cheeks of men and women, tears of gratitude and joy. Never was the Doxology of praise to God more heartily sung.

The Great Western Street Church is now an important centre of religious activity. The Sunday services are well attended by an intelligent, middle-class congregation. The monthly sermon and open church service usually form an attraction for the neighbourhood. The music is under the leadership of Mr. R.S. Catling, and is both hearty and refined. A fine organ stands behind the pulpit, which is skilfully played by Mr. W. Denman. The students and professors at the college are members here, and their attendance at the services increases the-interest.

The Sunday school is under the superintendency of Mr. Fred Gravell, whose fine spirit pervades the whole school. There are 430 scholars, of which nearly 200 are over 14 years of age. These are taught by 36 teachers. With a view to meet the wishes outsiders, a Pleasant Sunday Afternoon was started. It now numbers 260 members. The International Lesson for the day forms an integral portion of the service, and addresses on useful topics for 15 minutes are given. An orchestral band leads the praise, and the music is of a very high order.

The society has contributed to the interest of the church, and from its ranks have come some who have sought a closer fellowship.

The Church believes strongly in its duty to the young people. Two very large Societies of Christian Endeavour meet weekly. The junior branch has over 100 members, whilst the seniors number 80. The dominant note of the meetings is spiritual, whilst real service to Christ and the Church is secured. Every week a small band leaves the meeting with flowers for the sick and lonely. Cases of distress are met by donations from the members, whilst all the agencies of the Church have the hearty support of Endeavourers.

Provision is made for the recreation of the young men, and during the season a cricket club is run.

Temperance work is represented by the Band of Hope which meets fortnightly and provides an outlet for the young energy of the school and promotes the principles of Temperance.

It may be asked what is done to reach the non-church-going population. For some years a sister of the people has been engaged to visit the home of any one who may be willing to receive her. Sister Alice Clarke has held the position for four years. Her name is fragrant in the homes of the people. Her bright, healthy spirit carries sunshine with her wherever she goes. Her sympathy in cases of sickness and bereavement is great. The influence of the Sister over the young life of the Church has been of the most healthy kind; she is the confident of their secrets, the haven of refuge in their troubles, and a support in perilous moments.

The Church is animated with a good missionary spirit. In addition to the common efforts on behalf of the missions, the ladies are organized into a special society of their own. Monthly meetings are held to receive missionary news, plans are made for raising funds, and the result is that the missionary exchequer is strengthened by the sum of about £25 a year. Nor do they limit their efforts to money-raising. For, along with others, each month they visit 1,500, homes with a tract and invite the people to the house of God.

It may be asked, do we get people converted in this fine chapel and congregation?

Yes, we are thankful to say that it is no uncommon thing to see a seeker of salvation at the Communion rail, and the shout of victory has often been heard in this corner of the Master’s vineyard.