Heyhead, Little Marsden; Expansion paid for by an Anglican clergyman 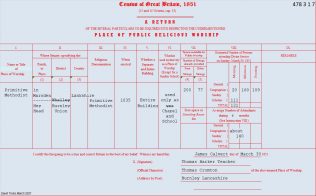 zoom
Marsden: return from the Primitive Methodist chapel to the 1851 Census of Places of Public Religious worship. Return no: 478 3 1 7
transcribed by David Tonks 2021

Preachers at the opening were Robert Kaye, Ingham Walton and Brother John Bywater. Two sermons were preached outside as there was no room inside the chapel. The services took place on 01/11/1835 and 08/11/1835.

The return from the Primitive Methodist chapel in Hey Head, Marsden  to the 1851 Census of Places of Public Religious worship was completed jointly by Thomas Harker, a teacher, and Thomas Cromton. They report that the chapel opened in 1835 and held 277 people, of whom 200 would have free seats.

On Census Sunday 20 people attended the morning, 160 the afternoon and 109 the evening services.  There was also a morning Sunday school with 111 scholars attending.

On Christmas day 1858, the chapel was re-opened after the addition of side galleries and a vestry, seating additional 70.  The work took five weeks and cost £100, which had all been raised. Many new members joined. Re-opening preachers were Rev Rumfitt, WH Walton, J Hedley.

I can’t find the chapel on later Ordnance Survey maps.  Where was it and what happened to it?