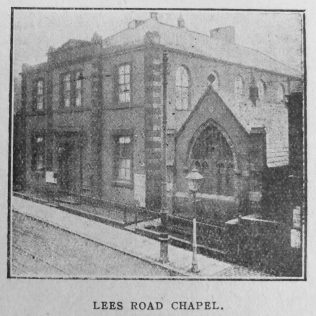 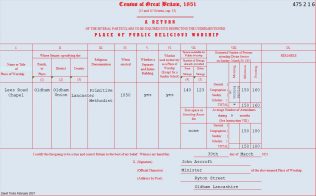 The 1892 Ordnance Survey map shows a Primitive Methodist chapel on the south side of Lees Road, towards the town end, on the corner of Wilkinson Street.   Wilkinson Street has since disappeared; it was between Cross Street and Terrace Street. The chapel disappears between 1954 and 1975.

You can read more about the development of the Lees Road circuit here.

There is a return from Oldham, Lees Road Primitive Methodist chapel to the 1851 Census of Places of Public Religious worship. Completed by the minister, John Ascroft who lived in Ryton Street, it says that the chapel was erected in 1850 and held around 260 people. Average attendance in the year before the Census was 150 in the Sunday afternoon service and 180 in the evenings.  There was no Sunday school.

The next piece of the jigsaw is an account of the opening in the 1865 Primitive Methodist magazine. It tells of a time when the cotton industry was suffering greatly from the trade disruption of the American Civil War:

“A New Chapel and Schools, Oldham Second.—We have recently completed the erection of a new chapel and schools at Lees Road, the land for which was taken, and the deeds executed during our editor’s superintendency here ; but in consequence of the cotton panic setting in, the project was brought to a stand for some time, the hope being entertained that the panic would soon be over, and the revival of trade warrant a commencement of the work.

But as the day of adversity still continued, we found it necessary to begin to build the walls in troublous times. The corner stone was laid on the 9th of May, 1864, by Mr. D. Clegg, our circuit steward, who placed thereon the handsome sum of £20. John Whittaker, Esq., of Hurst, had engaged to lay the stone, but not being able to come, sent £20 ; and during the proceedings Z. Mayall, Esq., one of our hearers, came up with a roll of bank notes amounting to £50.

The Rev. T. Lowe preached on the occasion, and a tea meeting was held the same evening.

The opening services commenced on the 18th December, when sermons were preached by the Rev. J. Eastwood and the Rev. D. Tuton ; on the following Sabbath the Rev. T. M. Albrighton and the Rev. W. Inman officiated ; on New Year’s day the Rev. S. Smith and the Rev. R. M. Danes preached. The services were well attended, a gracious influence rested on the people, and the collections amounted to £106.

On Saturday, January 7th, the opening services were closed with a tea party, upwards of 300 were present, and addresses were delivered of a useful kind by Revs. J. Graham and R. B. Howcroft, Mr. J. Mannock, and other friends.

The chapel is 60 feet in length, and 48 in breadth ; it is galleried round, and will seat upwards of 900 persons. It is well lighted and ventilated, and the front elevation is in the modem Italian style of architecture. The schools, which form a part of the same edifice, are 48 feet by 28½ feet, and will accommodate about 500 children ; and viewed from the street, the chapel and schools are a range of uniform buildings 88½  feet long. The plans, etc, were drawn by Mr. W. T. Thompson, of this town.

The cost of the erection will be £2,000, towards which we expect to realise over one third. This would have been done before now, but for the depression which continues among us commercially.

Our people have strained hard to accomplish the great object, and are still doing so, and by the time this article appears, we are sanguine that the vessel will be fairly afloat ; and if spared, we may report our future doings. Several conversions have taken place in connection with the services thus far, and we pray that the noble temple built at Lees Road, may be the birth-place of many, many precious souls. J. Eastwood. J. Lowe.”