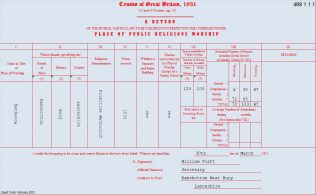 zoom
Ramsbottom: return from the Primitive Methodist chapel to the 1851 Census of Places of Public Religious worship. Return no: 469 1 1 1
transcribed by David Tonks 2021

Ramsbottom Primitive Methodist chapel in the Bolton Circuit was opened on 1/09/1833 – but as the day was so wet the opening day was repeated once everything had dried out. The event was described by S Tillotson.

The Sunday school had 150 members.

By 1851, the Return to the Census of Places of Public Religious Worship tells us that the chapel had an afternoon attendance of 38 and an evening attendance of 47.  The Sunday school continued, with 72 scholars in the morning and 65 in the afternoon. The return was completed by the secretary, William Platt.

Where was the chapel and what happened to it?