You are here: HomenextChapelsnextLancashirenextSnextSt Annes on the Sea King's Road Primitive Methodist church 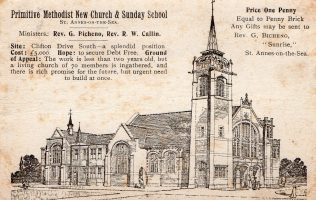 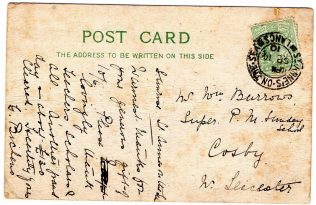 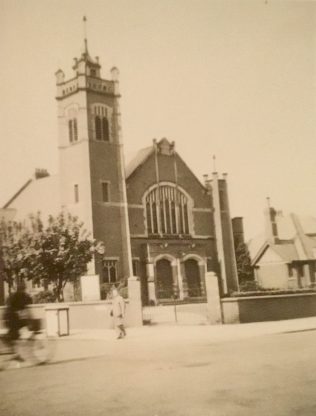 In the early 1900’s there were two Wesleyan Methodist churches in St Anne’s on the Sea, but there was no provision in the area for Primitive Methodist worship.

At the P.M.conference in Liverpool in 1907, this lack was considered, and it was agreed to form a new Society in St Anne’s. The Rev. George Bicheno was charged by the Missionary Committee of the Connexion with the work, the first time a minister was appointed in such circumstances.

Reverend Bicheno was a gifted man in his 30s, described as “a forceful evangelist endowed with a spiritual imagination, industriousness and compassion”.  He took up residence at ‘Sunrise’, 140 St Andrew’s Road South and began his task.

The first Primitive Methodist service was held on July 26th 1908 in the Public Hall, and in September premises were taken in the Assembly Hall in Century Building (now part of J R Taylor department store) in Garden Street.  By July 1909 the Society had outgrown the Assembly Rooms and the Primitive Methodists took over a chapel in St Andrew’s Road South, which the Baptists were vacating to move to their new Church.

In March 1909, agreement was reached with the St Anne’s Land and Building Company for a site on which to build the new P.M. church, on the corner of Link’s Road and Clifton Drive.  However, the Clifton Estate objected to another place of worship so close to the recently built St Thomas’ Church, and after protracted negotiations a site on the corner of King’s Road and Clifton Drive was reserved.

The design for the new Primitive Church building, which was chosen in an architectural competition, was put out to tender and in March 1910 the contract went to Messrs T. E. Davidson of Newcastle-upon-Tyne. The estimated building cost was £5000, and Sir William Hartley, of Hartley’s Jam, and President of the Conference, promised a donation of £600.

The appointment of an assistant minister, the Rev. R. W. Callin, freed Rev. Bicheno to travel around the country to raise funds for building the church. He either visited, or made contact with the  P.M. Church in Cosby, near Leicester:  hence the postcard, sent on September 14th 1910 to my great grandfather, who was the Superintendent of the Sunday School there. Reverend Bicheno wrote:

Warmest thanks for your generous gift of 10/6. Please lovingly thank teachers, scholars and all. Another grand day – about £130 cleared. Heartily yours, G. Bicheno

On September 10th 1910, the first stone was laid, and the church was opened by Sir William Hartley on  August  7th 1911. Within twelve months the members had raised £5,700 and when it celebrated its first anniversary in 1912 the Church was declared free from debt.

Despite the Methodist Union of 1932 and the proximity of two Churches on Clifton Drive, King’s Road continued to flourish as a separate entity for many years. Changes in post-war society saw church membership fall nationally and in 1967 King’s Road was faced with expenditure of  £2,000 for repairs and improvements, so a decision was taken to amalgamate with the Drive Methodist Church. The last service at King’s Road was held on 29 December 1968. The church was demolished, and flats were built on the site.

The church  could seat 513 people and had a school hall and six other rooms.