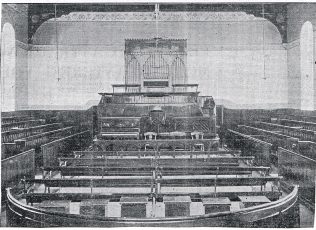 Primitive Methodism came to Bacup in the early 1800s when missionary activity from Halifax and Rochdale led to the establishment of small meeting places at Lee Mill and Bottoms Row at Stacksteads (currently the site of the Coronation Buildings of 1902).

Stacksteads Primitives built their first chapel near the bottom of Booth Road. The small premises known as ‘Chapel Cottages’ are still there. Eventually these would prove too small but the first School ‘Sermons’ were held here on the third Sunday in May 1851 after its opening in 1850.

Booth Road’s original premises were advertised ‘To Let’ in July 1882. Eventually, the condition of ‘Chapel Cottages’ deteriorated so much that they were scheduled for demolition. Wiser counsel prevailed and they were made into one private residence which is still occupied today.

In the summer of 1872 Rev’d Joseph Prestwich was appointed to Bacup. In that year he paid a visit to America. The trustees of Booth Road delayed their annual Chapel Sermons until he returned in the hope that he would give an appropriate lecture on that visit for the benefit of the new chapel. This took place on December 1st prior to which the trustees had magnanimously  agreed to pay him an extra 10/- for his services that day.

Booth Road Missionary Sermons welcomed among others Rev’d John Howe from Waterbarn Baptists and  Rev’d Samuel Chadwick, whose (lay) ministry began at Stacksteads. Whilst Wilhelemina Stitch, famous for her daily rhymes, caused a great deal of fun and laughter when she visited on 21st February 1931.

Dry rot was discovered in 1951 and with a balance of only £101.00 it was felt that the cost of repairs was beyond the members, so in May 1952 it was resolved to amalgamate with what had come to be known as ’Sammy Chad’s with effect from 19th August 1952. The building was rented out for commercial use until 5th June 1982 when it was hit by a massive thunderbolt which necessitated its demolition a year later.