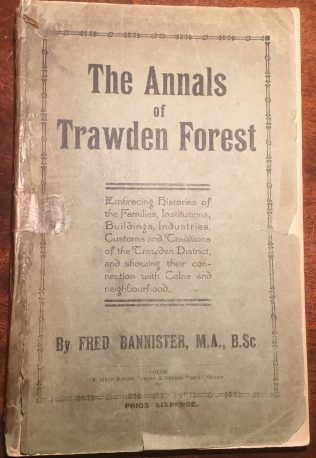 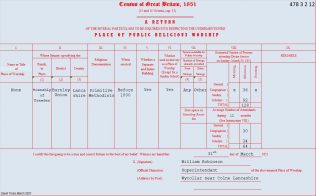 zoom
Trawden: return from the Primitive Methodist chapel to the 1851 Census of Places of Public Religious worship. Return no: 478 3 2 12
transcribed by David Tonks 2021 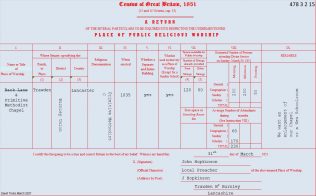 zoom
Trawden, Back Lane: return from the Primitive Methodist chapel to the 1851 Census of Places of Public Religious worship. Return no: 478 3 2 15
transcribed by David Tonks 2021

The first Primitive Methodist society met in a room under the corner shop in Chapel Street.

About 1826 they built a chapel, and had a burial ground attached. Pave Mill was later built on the site.

It seems that the chapel was initially the private property of a very eccentric character, Edward James Taylor, who had once been a Primitive Methodist minister. In 1850 he sold it for 19 guineas to the following trustees:

The trust declared that the premises were to be used in conformity with a deed poll under the hands and seal of Hugh Bourne, James Bourne and William Clowes, dated 5 February 1830. This relates to the doctrines and discipline of the society, and permits the building to be used as a day and Sunday school room, and also as a lecture room for the advocacy of the principles of total abstinence from intoxicating drinks, and for lectures on literary and scientific subjects, as long as the lectures and school do not interfere with the religious services of the society.

If a more eligible site for a chapel could be found within the hamlet of Trawden, then the trustees should be at liberty to sell the building and use the proceeds to build a new chapel. If there was any money left over it should be used to discharge the debts owing on the Primitive Methodist Chapel at Laneshaw Bridge. near Colne, and after that to discharge debts owing on chapels in the Burnley Circuit.

It seems a better site was finally found in 1875, when a new chapel was built.

The Hartley Memorial Sunday School was named in honour of Sir William Pickles Hartley whose father was a Trawden tradesman, and ‘has always responded most generously to every appeal for the church of his fathers.’

His uncle, Robert Hartley, became a Primitive Methodist minister, and was the first person from Trawden to serve overseas, going to Australia at the time of the gold rush.

The Primitive Methodist magazine of 1836 contains an account by John Moore of the opening of Trawden Primitive Methodist chapel in the Burnley circuit in 1835 (9 years after the opening date suggested above). Opening services took place on 19/04/1835 and 20/04/1835 and were conducted by Brother Thomas Smith and Brother Page.  There was extra preaching outside as there was no room inside.

On the 1848 Ordnance Survey map a Primitive Methodist chapel is marked north of Back Lane around the site of the later Pave Mill. By 1893 Bethel Primitive Methodist chapel is clearly marked on Colne Road, a little to the south of Back Lane and on the opposite side of the road. By 1963 the chapel has disappeared but the Hartley Memorial School remains.  That has disappeared on Street View in 2011.