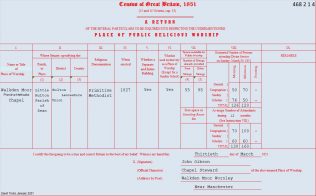 zoom
Walkden Moor: return from the Primitive Methodist chapel to the 1851 Census of Places of Public Religious worship. Return no: 468 2 1 4
provided by David Tonks 2021

The society was a longstanding one and the first chapel was built around 1827.  The Return to the Census of Places of Public Religious Worship in 1851 shows that it seated 150 people.  On Census Sunday there were 160 – 60 of whom were in the Sunday School.

The plans were drawn up by Mr. Davison, a member in the Manchester 2nd circuit of the firm of Dugdale and Davison, builders, who became contractors for the building. The chapel was 12 yards by 14 outside and stood on an elevated plot with a commanding aspect so it could be seen for some miles. The floor is boarded throughout, and the centre utilised the pews from the old chapel. It has a gallery and overall accommodated 500 people. There was also a vestry, “with a boarded floor, fire grate, and boiler”.

On the 12th September, 1852, it was opened. Preachers at the opening services included Rev. Thomas Bennett, of Otley circuit, who came from Walkden Moor, Mr. John Read, Rev. T. Pennington, Wesleyan, of the 1st London circuit, also from Walkden Moor and Rev. T. King, of Bury.

The whole cost is about £589 towards which they had have raised by the opening services, £279. 16s. 3d.. The outstanding debt of £310, which was lent by the trustees, on promissory notes, at five per cent. With a growing congregation they expected the debt to reduce each year.

Later, Memorial Road Primitive Methodist was built on the corner of Memorial Road and Rushton Street.  There were cottages on the site which were used for meetings before the church was built around 1900. In 1929 a new building replaced the cottages and became the church which remains on Street View in 2016 as the Citadel of Celestians Cathedral. The original building has been demolished.

I can’t locate the 1852 chapel on available Ordnance Survey maps; do you know where it was or what happened to it? We would welcome pictures of the later chapels