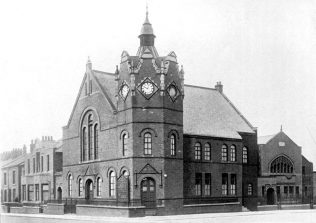 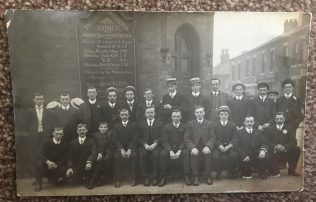 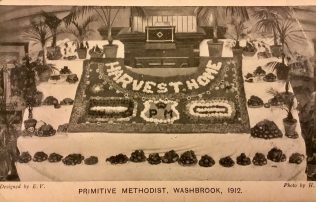 The next stage in the story of Primitive Methodism in Washbrook followed from the postcard sent in by Mark Graham showing a young men’s group lined up outside an unidentified  Primitive Methodist chapel  entrance.

One clue to the location is the minister named on the notice board as the Rev G Hunt.  In our obituaries for Primitive Methodist ministers, we only have one Rev Hunt – Rev German Hunt (1859 – 1934). He served from 1880 – 1925 almost exclusively in Lancashire and Yorkshire circuits.  That would fit with the terraced housing in the background of the picture.

Rising to the challenge of identifying the chapel, John Anderson tracked it down as the 1896 Sunday School and later church with hexagonal tower at the corner of Butler Green and Coalshaw Green Rd in Chadderton, Oldham. Originally known as Washbrook Primitive Methodist Church, it became simply Washbrook Methodist Church and latterly South Chadderton Methodist Church.  Door, doorway and decorative stonework are identical. Brilliant work John!

Detail is completed by the report in the 1893 Primitive Methodist magazine of the opening of the new set of premises at Washbrook – chapel, school, classrooms to replace the earlier small school-chapel.