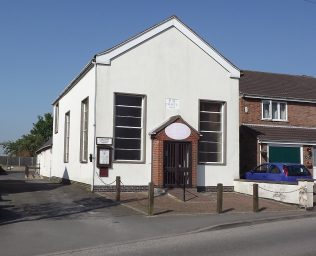 John Welford, of Barlestone, has provided a picture of the Barlestone ex-PM Chapel. The picture was taken in 2012 when the chapel was still open. It has been closed for at least two years and the future of the building is uncertain.

Barlestone Primitive Methodist chapel was built in 1833, with 80 free and 30 other sittings. There was just one service on Sunday 30 March 1851, in the evening, when 64 people attended.

(added by CH) The Primitive Methodist magazine of July 1857 contains an account by James West of the re-opening of Barlestone Primitive Methodist chapel after “a thorough renovation.” Re-opening services were held on April 12th 1857, although “the congregations were not so large as were expected”.

A public tea meeting was held the next day attended by “a goodly number sat around the festive board” despite unfavourable weather. “Lively and spirited sermons” were preached by J Hunt, R Price, C Wood, Rev T Roberts and Rev J Wilkinson.