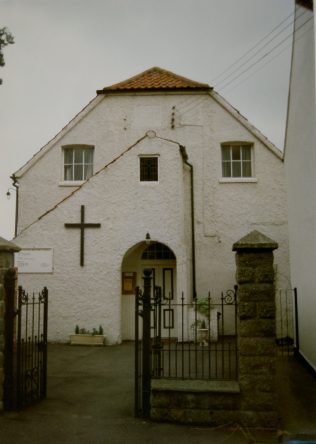 Bottesford  Primitive Methodist chapel is located on Devon Lane which used to be called (and is still often referred to locally) The Green.The chapel was opened in 1820.  It is still the current Methodist church (2015).

Rev Kendall describes Bottesford in the early nineteenth century as a less than alluring place to mission.  ”At Bottesford, under the shadow of the stately towers of Belvoir Castle, Benton met with a rough reception. As soon as he began worship in the open air the bells of the church were set a ringing, a dog-fight was got up, a big drum beaten, and various instruments blown and clashed. All this babel of sound and confusion failing of its purpose, rotten eggs, tilth, and stones were flung at the preacher, who nevertheless stood his ground. When, some tune alter, (April 2nd, 1818) John Harrison entered Bottesford, he was treated in much the same way as Benton had been, save that there is no mention of the instrumentalists, for the beater of the big drum had followed Benton about until he had got converted, and the band by this time had been broken up. Says Harrison, of. Bottesford : — ”This place may be called ‘Little Sodom’ and 1 should be surprised if God did not destroy it, was it not for the few righteous souls that are in it. I preached at night, and met with much annoyance from the sinners of this place by their pelting us with dirt and rotten eggs in abundance, but I came off scatheless.”

Yet in spite of High Church influence, Antinomianism and mob violence, a nourishing society was soon gathered. A chapel was erected, and for many years Bottesford has stood as the head of a station.”

The Primitive Methodist magazine contains an account of the re-opening of the chapel on Sunday 19th July 1829 after the addition of a front gallery.  Preachers included  Brothers Simmons, King and Thompson.

We are told that there was lots of opposition at the beginning, with church bells and drums used to make a noise close to those worshipping in the open air, but, despite that start, the Sunday school contained 100 scholars.

Kendall HB (1906) The origin and history of the Primitive Methodist Church, Dalton, London