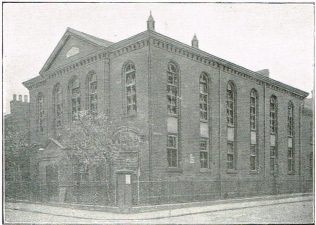 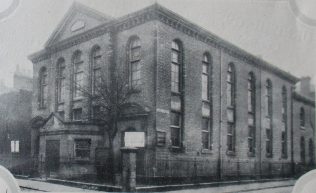 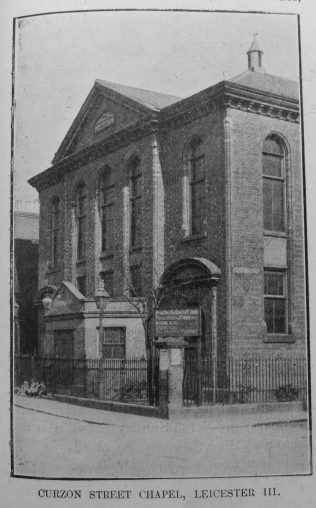 Primitive Methodism came to Leicester in 1818. The first Chapel erected was in George Street, which opened in 1819, and could seat 900 people. By 1858, the trustees of George Street realised that the growing industrial expansion of Leicester meant there was a need for a new church in the as yet undeveloped area around Curzon Street, where the streets were planned but not built. Thanks to their vision, in April 1859, the foundation stone of the new chapel was laid. The occasion was reported in the local newspaper.

‘On Monday afternoon, the 25th inst, the foundation stone of the PM New Chapel, Curzon Street, Humberstone Road, was laid by John D Harris, Esq. The weather was unfavourable, but a large concourse of persons attended.

The service was preceded by a procession from George Street Chapel, consisting of the Circuit Ministers, the Trustees of the new chapel and a portion of the local Preachers, Leaders, members and friends, with a part of George Street Sunday School in the rear. On arriving at the site, the hymn was sung beginning with ‘Before Jehovah’s Awful Throne’ etc, and the Rev W Lea engaged in prayer. The stone was then laid by Mr Harris in a very graceful manner, after which the Rev R W McAll delivered an appropriate and very telling address and the Rev J Brownson concluded with prayer.

At five a Tea Meeting was held in the New Hall, Wellington Street, when upwards of 500 persons partook of the refreshing cup. A great portion of the provisions was gratuitously provided by friends of the cause.

After tea a crowded public meeting was held in the Hall, over which JW Noble, Esq, presided with great ability. Amongst the speakers were the Revs J Brownson, W Lea, R Harris Esq, Messrs Harrap, Bennett etc. The speeches were intermingled with some excellent pieces by the choir of George Street Chapel. The entire proceedings were of a very satisfactory character and terminated about 10 pm.’

In 1865, a major rebuilding took place, when the Chapel was enlarged and new School Halls built, at a cost of £1,655.  It is thought that the old chapel ended just in front of the pulpit in the enlarged church. The original school rooms were not big enough, so they were incorporated into the Chapel and new halls built.

In 1878 a legacy enabled them to improve the front of the church by adding a wall, railings and laying out a gravel path.

In 1882 an extension was planned, to be called the ‘Stanley Terrace School Room’. The carpenter, Mr Durance, was to make a platform for the large school room, suitable for week evening Gospel Temperance Meetings.

Rev Edward McLellan was the minister at Curzon Street from 1902-05, at which time it was one of the strongest of the Free Churches in Leicester. As well as excellent morning congregations, and a full church for the evening services, ‘Class and Prayer Meetings were sustained with power, and led by enthusiasts.’ There was also a large Sunday School, ‘with an unusually fine Senior Department the like of which I have not seen since. The quality of the gymnasium for young men could not have been bettered anywhere.’

Robert A Buckley served his first appointment as a probationary PM minister at Curzon Street (1907-08), and was presented with a clock when he left a year later. ‘A vision of the Leaders and Officials of the Church with Silk Hats and Frock Coats on their way to the Church on the Sabbath day remains with me.’  He was an assistant minister to William J Ward.

From 1911-15, the minister was Arthur W Bagnell. He found people at Curzon Street who were ‘enlightened, devoted and zealous for the Kingdom of God, deeply interested in their own moral and spiritual welfare and that of their families, and in the salvation of people, near and far.’  The circuit steward at that time was Joseph Lee, ‘who held an influential post in the educational life of the City … It was an inspiration to hear him pray, either in the vestry prior to the service, or in a larger assembly.’  T W Walker was Sunday School Superintendent, and also an Alderman, who took an active part in civic duties and represented ‘the Methodist outlook on many public questions.’ The choirmaster was Ernest Lakin, C Brant was the organist, and T Major also helped with the music of the church.

Arthur Jubb came to Curzon Street in 1918, when the church was at a low ebb, as the First World War meant depleted congregations, as the young men were away fighting in the forces. By the time he left in 1927 the church was stronger, but the impact of the war was a lasting one.  He had probationary ministers to help him. George H Hall (1920-21), William V Sibson (1921-24), and George Fairfoot (1924-28).

Thomas Bullock (1931-39) also remembered the outstanding warmth of the circuit steward Joseph Lee and his wife. Mrs Cooper was Cradle Roll Secretary, with 1,000 children from 0-5 on the cradle roll, for whom she cared. There was also a strong Christian Endeavour, working with the young people.  It owed its strength to the commitment of the early leaders, Mrs C Durance and Miss De Borde.

Curzon Street celebrated its centenary in 1960. The church was later demolished when the area was redeveloped.

Souvenir of the Centenary of Primitive Methodism in Leicester, March 1918