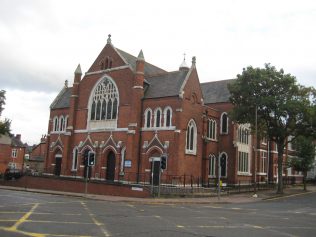 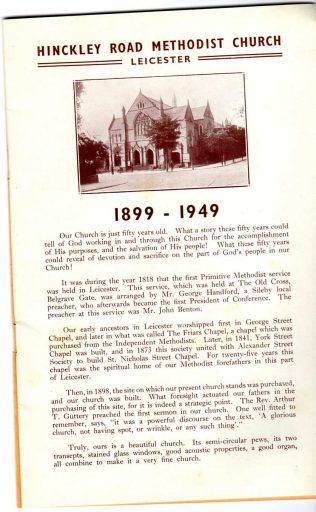 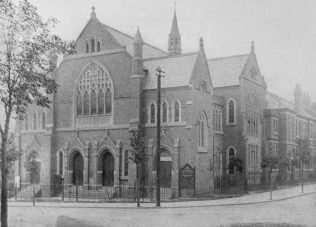 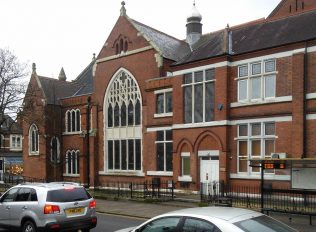 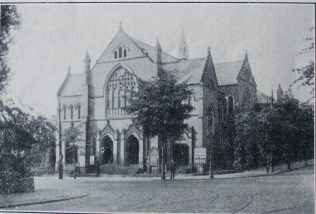 Hinckley Road Primitive Methodist Church, Fosse Road South, Leicester started life in the schoolroom in 1898. The church opened at the side of the schoolroom the following year.

Unfortunately there is nothing to identify that this impressive building was a former Primitive Methodist church, one which played an important part in the Society’ activity in Leicester and the surrounding area.

In 1966, it amalgamated with King Richards Road Methodist Church, and since 1969 has served as a Catholic church to the Ukrainian community.

The text of the 50th anniversary literature reads:

It was during the year 1818 that the first Primitive Methodist service was held in Leicester. This service, that was held at the Old Cross, Belgrave Gate, was arranged by Mr George Handford, a Sileby local preacher, who afterwards became the first President of Conference. The preacher at this service was Mr John Benton.

Our early ancestors in Leicester worshipped first in George Street Chapel, and later in what was called The Friars Chapel, a chapel which was purchased from the Independent Methodists. Later in 1841, York Street Chapel was built and in 1873 this society united with Alexander Street Society to build St. Nicolas Street Chapel. For twenty-five years this chapel was the spiritual home of our Methodist forefathers in this part of Leicester.

Then, in 1898, the site on which our present church stands was purchased, and our church was built. What foresight actuated our fathers in the purchasing of this site, for it is indeed a strategic point. The Rev. Arthur T. Guttery preached the first sermon in our church. One well fitted to remember, says “ it was a powerful discourse on the text, ‘A glorious church, not having spot, or wrinkle, or any such thing’ “.

Truly, ours is a beautiful church. Its semi-circular pews, its two transepts, stained glass windows, good acoustic properties, a good organ all combine to make it a very fine church.