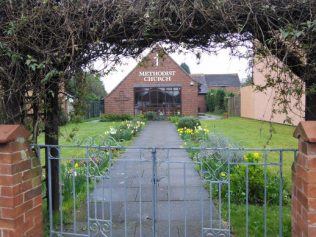 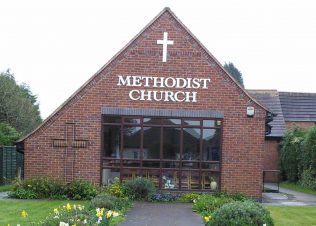 Knightthorpe Road is in a suburb of Loughborough, about a mile from the Town Hall. The Loughborough Circuit website gives the following brief description of the origins of the present church:

“Knightthorpe Methodist Church owes its existence to a group of Christians who met in a member’s home until they outgrew the space. They erected a simple room with a small vestry which was opened in 1915 as a Primitive Methodist Mission. This small room still exists today as the main body of the church. The church saw a number of extensions and improvements (including the addition of seating, communion rail, pulpit and a wall-mounted cross) until, by 1939, it also had a small entrance porch and an ex-army wooden hut at the rear, to house the growing Sunday School. The entrance from Knightthorpe Road was also improved to give the central path and double gates which remain today.”

The Church is discreetly set back from the roadside.  When I first moved to Loughborough, I drove past it several times before discovering it.