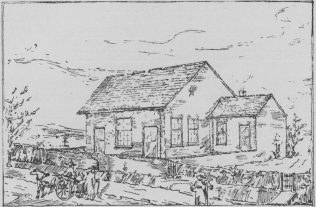 Loughborough was missioned in 1817 by John Benton.  On January 24th 1818, Hugh Bourne visited the town and during succeeding months made several visits to organise and consolidate the work.  There was rapid progress.  By May 1818, a piece of land had been bought and a Chapel built in Dead Lane – the first Primitive Methodist chapel in Leicestershire.  Later the same year, Loughborough became the third Primitive Methodist Circuit.

Dead Lane chapel served until 1849 when a new chapel was opened in Swan Street, enlarged in 1870.

The Swan Street Centenary Souvenir Programme shows the significance of non-conformity in Loughborough in the first decades of the nineteenth century.  In 1809 the population was 5,000; in a return of chapels in 1829, there were 2,986 members.  There was a chapel for each of the following: General Baptists 1,050;Particular Baptists 300; Methodists 1,200; Primitive Methodists 150; Independents 145; together with Quakers and others.

Nineteenth century Ordnance Survey maps show Dead Lane running from The Unicorn public house in Biggin Street to Bridge Street.  It is not clear where  in Dead Lane the chapel stood.