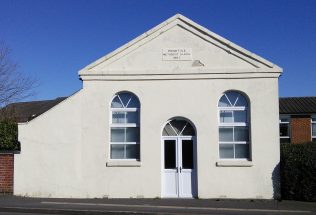 Primitive Methodists were meeting in Thringstone from the 1830s but the current Thringstone PM chapel was built in 1863, at a cost of £99-15-0 on top of £12-10-0 for the land.  The building work was completed in only three winter months by Mr Hextall, although it took the trustees over 50 years to pay off the loans used to fund the work.

The former PM and Wesleyan Methodist societies in the village united in 1964 and continued to meet in the former PM chapel.  A new hall was added in 1975 to the rear of the chapel.

In 2016, church member Mrs E. Illedge wrote about the history of the chapel in the circuit magazine.  It is reproduced here with her permission and that of Brian Nicholls, the Editor.

“In 1858 the stalwarts of the village held prayer meetings in a barn on Henson’s Lane.  Then moved to an old house in a field, which later became the Woodside Estate where miner’s families from Scotland and northern counties were housed.  A piece of land was purchased for an amount believed to be £70, where the present church is situated, although the land reached as far as the roadside next to the Fish Shop.   By 1862 enough finance had been accrued to build the chapel.  Pews and an altar were purchased from various churches, the pipe organ costing £350 from Walsall and finally a false floor, carpets etc. completed the building.

The chapel was officially opened in 1863 with a large congregation, including many children.

A Sunday school was started in 1866 and the Women’s Guild in 1953.  Sadly, neither of these important Church functions continue today because of falling numbers.

In 1911, Thringstone Community Centre opened and from that year until 1990 our Church Anniversary was held there on the first Sunday in May.  The electric organ was transported across the road and the platform was assembled.  Afternoon and evening services were always full to capacity every year.  Wonderful memories.  Thringstone Methodist church was always known for its singing by children and adults at that time.  Again, sadly, not today!

In 1948 fundraising projects such as Summer Fairs were held on land called “Charities Field” behind Ruby’s Fish Shop, where fairground items are now stored and a Nissen hut was purchased from Ravenstone for £126.  This was made of zinc and bricks were added to complete the structure.  Fortunately there were workmen from every necessary trade in the congregation who gave their skills free of charge to complete “The Hut” (although Arthur Sykes’ father insisted on it being called “The Assembly Hall”).

In 1970, some land was sold and the present church hall  was built in 1975.  Today this is hired by many groups and individuals and the revenue is keeping our church open.

At present, our congregation averages 10 devout but aging people, most of whom have been brought up since childhood at this church and are determined to keep it going as long as possible.  We are traditional in our worship, but not lacking in faith and hope for the future.  We pray that one day our numbers may increase, but we trust in God’s plan for our church.”