zoom
Former Primitive Methodist chapel at Thurmaston together with the adjacent Sunday School, which was later used as the worship area.
Christopher Hill January 2019 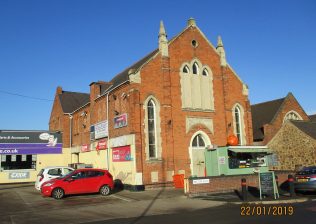 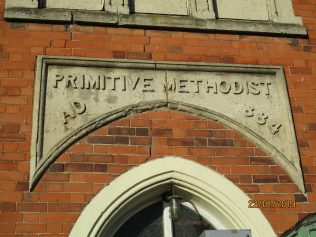 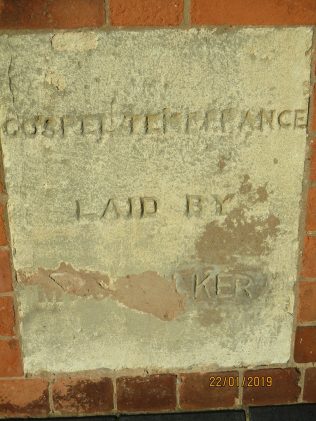 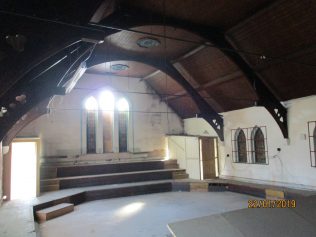 zoom
Turmaston Bethel; a floor has been installed at former balcony level and the lower part is used for car part storage. Look at that roof!
Christopher Hill January 2019 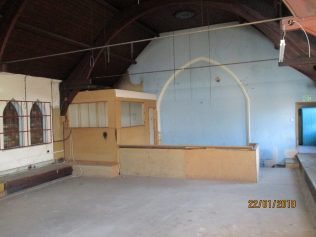 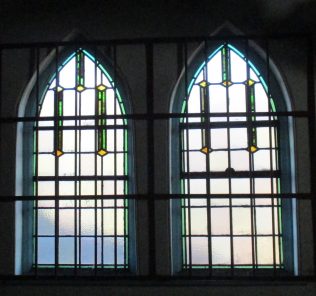 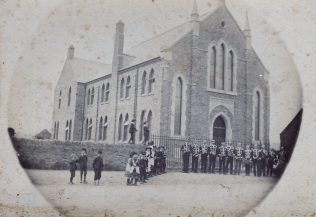 zoom
THurmaston Bethel Primitive Methodist Chapel 1884, the image is believed to have been taken on or very soon after the Opening Day. The band is the Syston and Thurmaston Prize Silver Band
Supplied by Ray Young
Thurmaston Bethel chapel

Thurmaston Bethel Primitive Methodist Chapel in Melton Road was built in 1884. It followed on from an 1833 chapel in Garden Street – see here. The foundation stones for the new chapel were laid on Whit Sunday. The architect was Mr Day of Wymondham and the chief contractor Mr Clayton. The contract sum for the chapel was £735 and for the schoolroom £240. The original plan was simply to build a chapel but a fortuitous opportunity to sell the old chapel meant that funds were available to build a school across the back of the chapel. The chapel measured 30 feet by 45 feet. It had galleries on three sides and seated 500. The school measured 24 feet by 36 feet. There were five classrooms on the ground floor with a schoolroom above. By 1920 the chapel and the school seated 500 persons each and to date £4000 had been spent on the construction and alteration of the buildings.

In 1925 the chapel received the gift of some land worth £320. Presumably this was the site on the north side of the chapel and the stone building which still stands on the front of the site. A new school was built here in 1928. A substantial extension was added on the north side during the post war period

In 1940 the chapel had seating for 350 in pews and there were two schoolrooms and nine other rooms.

The buildings are no longer used as a Methodist place of worship but it is difficult to determine what, if any, is the current use.