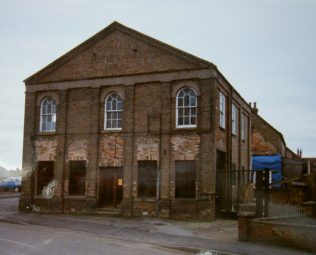 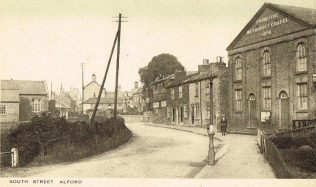 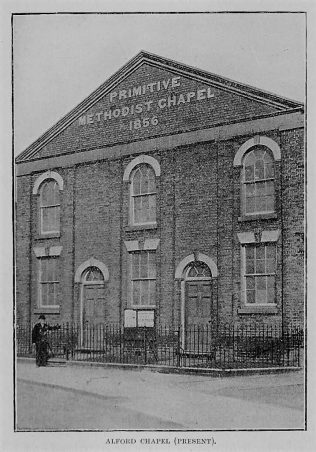 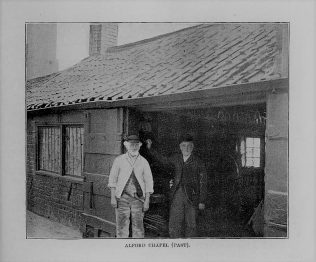 The first Alford Primitive Methodist chapel dates from 1820 and was in Ranters’ Row. It served until 1837 and was then sold to the Baptists. The street still exists but I can’t see the chapel.

The second chapel in South Street dates from 1837.  It opened on Sunday 19th February when the preacher was Brother Butcher. The Prims had opened their mission in the town early in 1836 and had more than 40 members by the opening. The chapel, which measured 27′(w) 36′(l), was one of a series of chapels opened in the Louth circuit following the mission work of John Stamp from Hull.

The chapel was enlarged in 1856 and a schoolroom added in 1873. The enlargement was described by W Marwood in the 1856 Primitive Methodist magazine. The reason was simply that the existing chapel was not large enough for the demand.  They did not have the room to extend, so raised the roof and added gallery to seat 180 “ornamented with a beautiful timepiece”. The gallery cost around £200; of which they had raised around £80 from donations, including from Messrs. Young, Maltby, and Byron, and a tea meeting for 200 held in the Mechanics Institute.

After amalgamation with the West Street society, the chapel was closed in 1946.  Keith Guyler’s notes with his photograph say that it was sold to a Funeral Director and in 1980 became a factory and egg packing warehouse. On Google Street View in 2009 it has the funeral director’s signage, so maybe the notes are the wrong way round. Can anyone help?