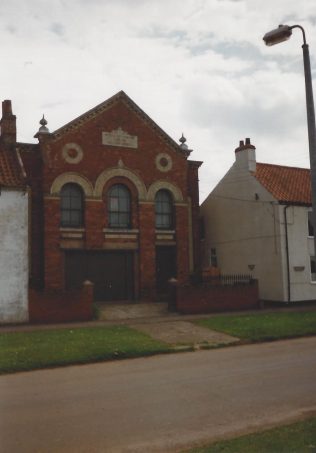 Alkborough Primitive Methodist chapel initially dates from 1827 and a second chapel dates from 1865. This chapel was called Bethel and was located on Front Street.

After closure in 1938 it became a storehouse. It looks little changed from the 1997 photograph on Google Street View in 2009.

The opening of the 1865 chapel is recorded in the Primitive Methodist magazine.

“Alkbro, Winterton Circuit.— The opening services of a neatly constructed chapel here were closed, April 23rd and 24th, when three sermons were preached by the Rev. A. Johnson. The Revs. J. .T. Shepherd and Wm. Sanderson had preached, in connection with the opening of the chapel, the first and second Sabbaths of the year, and the Monday following each ; and the Rev. V. Tyas preached when the foundation stone was laid, September 28th, 1864.

The ceremony of laying the stone was performed in a rather unusual manner ; two ladies and one gentleman took the lead, laying each five pounds on the stone, and many others joined in the ceremony, chiefly young ladies and young gentlemen.

The collections at the opening services amounted to £20 15s. lid ; the sum raised at the foundation stone laying was £32 12s. ; and altogether by various means the sum of a little over £238 has been obtained. Mr. J. T. Shepherd, my predecessor, along with the trustees and other friends, acted a very prudent part in this matter.

They got up a bazaar and tea parties, and obtained donations, and thus raised over £150 before the building was begun. Better have the money before the work is begun, than get the work done and then have the money to seek. E. Tyas.”