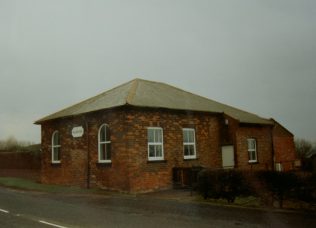 The Barton and Brigg Methodist Circuit website tells us that Bonby Primitive Methodist chapel was built in Main Street in 1840. It closed in 1946, when the united congregation returned to the former Wesleyan Methodist chapel.  After closure it became the village hall, still on Google Street View in 2016.

In May 1856 the Bronby society started a Sunday school in Mr G Walker’s barn.  Within weeks they had 60 scholars and 12 teachers so early in 1857 they asked the Earl of Yarborough for a piece of land at the rear of the chapel to build a Sunday school. The good Earl did not want to do that, but instead offered to rebuild (at his own expense) the chapel on another site in the village and give adjoining land for the building of a school.

The Trustees accepted and the new chapel and school room were opened on July 5th 1857. Opening sermons were preached by Mr G Watson and Mr Kirkland (Wesleyan).  The following tea meetings accommodated 70 children and 200 adults and the society had raised over half the cost of construction of the Sunday school.