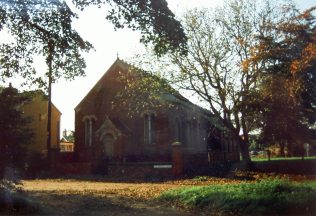 “Our new chapel here was opened by the Rev. W. Sanderson, Mr. S. Gibbons, and Mrs. Lonsdale, on July 20th and 27th, 1856, when many a heart was melted, and liberal collections realized. The ground is taken on lease from the Right Hon. the Earl of Yarborough. The chapel is finished very satisfactorily, at a cost of about £94. Begging efforts will be continued till the debt is reduced to £50. The trustees tender their thanks to all who have lent a helping hand, especially to Mr. W. Gibbons, who has been their principal friend.“

This second chapel known as Cadney Centenary Primitive Methodist chapel served until 1973. Keith Guyler described it as derelict in 1995 at the time of his photograph. On Google Street View in 2011 it is little changed.