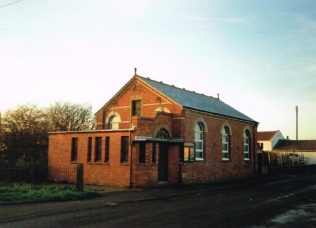 Chapel St Leonards Primitive Methodist chapel dates from May 1836. Writing in the Primitive Methodist magazine, John Coulson tells us that opening preachers were Bros. Buttery, Horner and Stamp. Mr Briggs, a member, gave the land and supervised the building, wich was enlarged a few weeks after opening.

At the 1851 religious census, the average congregation in the chapel, including the Sunday school children, was 80 at the morning service, 180 in the afternoon, and 160 in the evening, although the village population was only 300.

An account of the foundation and growth of the chapel is on the East Lincolnshire Methodists website.

Thanks to Ray and Marie Ella for the information that Lincolnshire Archives, Lincoln has the following records relating to this chapel: