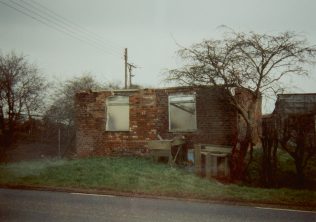 It was sold in 1965 and at the time of Keith Guyler’s photograph in 1995 was derelict and roofless. Although its location is clearly marked on the 1:2,500 1905 Ordnance Survey map of Lincolnshire and in the given grid location, I am unable to positively identify it on Google Street View in 2010. It would have been in the area of the Fair Holme bungalow. There is an abandoned wall in the bungalow next door. Can anyone clarify?