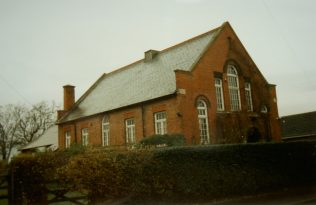 Corringham Primitive Methodist chapel shown in the photograph taken by Keith Guyler is actually the third chapel building in the village. It dates from 1909 or 1910: on the front of the building it now has 1908 painted. It was sold in 1973 and was converted into a house  – the old Chapel.

There is an account by W Lonsdale of the opening of the 1858 chapel in the Primitive Methodist magazine. Speakers at the opening services from October 17th 1858 included James Dawson of Retford and E Tyas of Brigg.

The chapel measured 31′ x 22′, seated 95, had a slate roof and boarded floor, and was well ventilated. The chapel was valued at £150 and they had raised £44 towards it. The land was given by John Smithson, an “old Primitive”. Mr Tasker provided much of the energy; Thomas Driver oversaw the work; Mr Hiles fixed the iron palisading for free; Henry Hirst gave the sand; Mr Fisher did the brickwork well and Edward Pinder did the joinery work “in a masterly manner”.