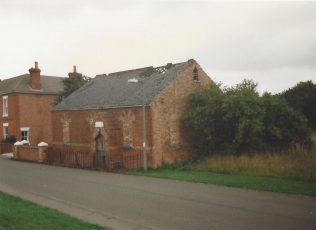 Bourne Primitive Methodist chapel in East Butterwick dates from 1830 and was rebuilt on the same site in 1870.  By 1870, the 1830 chapel was too small and dilapidated but there was no land for expansion so a larger and more convenient plot was secured.  The foundation stone was laid on 15th July 1870. JT Shepherd reports in the Primitive Methodist magazine the opening of the chapel on 27th November 1870 when the preacher was Rev W Harland.   The new chapel seated 150 and measured 35′(l) x 28′(w) x 16’8″(h).

The chapel closed in 1969 due to structural problems and the society amalgamated with the Anglicans. The building was sold in 1973 and at the time of Keith Guyler’s photograph in 1996 he described it as derelict.

On Google Street View in 2008 it has lost its roof and the windows have been bricked up.

In September 2014 it was offered for sale at £35,000 with planning permission to convert into a three bedroomed detached dwelling.