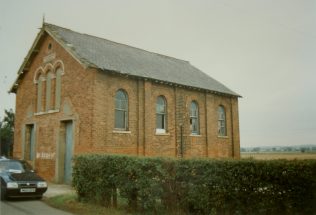 The first chapel in East Stockwith was built 1819 and a larger one opened 1840.  The chapel in the photograph is the third East Stockwith Primitive Methodist chapel. It opened in 1870 when it seated  190 and had a schoolroom underneath. The 1870 chapel served until 1948. It’s opening was described  by JT Shepherd in the Primitive Methodist magazine. Opening preachers included Revs J Tongue, J R Parkinson, J Stephenson, C Spivey & C Leafe

At the time of the photograph the chapel was used for storage and derelict. On Google Street View in 2009 it is still in the same poor condition.