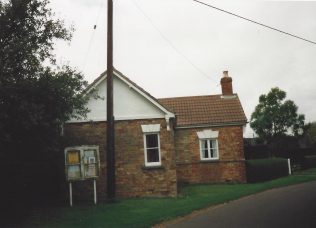 Goulceby Primitive Methodist chapel was built in 1834 and was enlarged in 1837. In the Primitive Methodist magazine for 1834, Henry Sharman dates the opening services as 06/07/1833 & 07/07/1833 when the preachers were J Butcher and W Paddison.  The opening was embellished by Mrs Wright giving the chapel a beautiful bible and hymn book.

Mr Guyler’s notes say that the chapel closed in 1886 and was converted into a house.

However, there is confusion. Although Keith Guyler gives a grid reference with his picture (255795) which points to Top Lane just east of its junction with Butt Lane, his picture is of a building at the opposite end of the village. Thanks to Eve Sardeson (see below) for identifying it as a blacksmith’s shop.  The 1887 Ordnance Survey map of Goulceby does not show a Primitive Methodist chapel – but does label the building in the photograph as a smithy and the Top Lane reference point as a school.   A survey in 1887 would be just after the chapel is said to have closed.  I do not have access to earlier maps.

So where was the Primitive Methodist chapel? Can anyone help?

There were Wesleyan and Free Methodist chapels in Butt Lane.