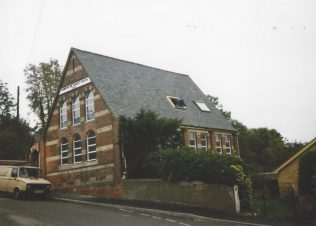 At the time of Keith Guyler’s photograph in 1993, Grasby Ebenezer Primitive Methodist chapel was in the process of being converted into a house called The Old Chapel.  It had closed as a church two years earlier in 1991.

There had been a previous chapel in the village dated 1841. There is a note by Thomas Kendall about it in the Primitive Methodist magazine of December 1853. Following an upsurge of enthusiasm, the chapel was closed for cleaning and repainting. Re-opening sermons were preached on October 16th by Mrs T Barkworth of Keelby. On the Tuesday there was a celebration tea, which enabled them to pay off the outstanding debt on the chapel

The Primitive Methodist magazine for February 1894 celebrates the new chapel.  “The period of barns, cow-byres and stables is past and great reluctance is shown now to worship in cottages”.