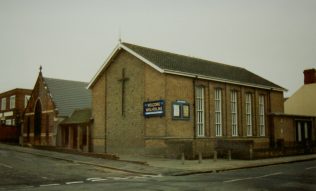 Grimsby Welholme Road Primitive Methodist chapel, on the left in Keith Guyler’s picture, dates from 1897. It was replaced in 1959 by the chapel on the right.

The chapel was in the Grimsby First Circuit. Its establishment as the fifth centre of work in Grimsby  is reported in the January 1897 Primitive Methodist magazine. They had acquired a site for both chapel and Sunday school and at that time the foundation stones for the Sunday school had been laid and building commenced. It  would cost around £600 and was expected to open in early spring; the building of the chapel had been deferred

Google Street View in 2008 – 2015 shows considerable change. Welholme Road is no longer a through road but stops just east of the chapel. The 1897 chapel has been demolished although the second chapel is still in use and active as St Christopher’s Methodist Church.

An earlier chapel dates from 1859.