You are here: HomenextChapelsnextLincolnshirenextHnextHaconby Chapel: near Bourne 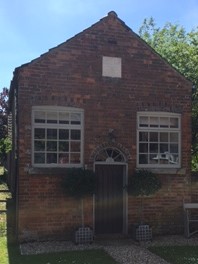 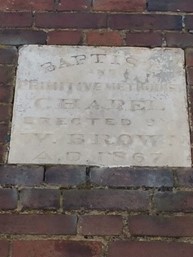 Possibly a unique chapel in that it was built for joint denominational use in the nineteenth century, in that it was clearly intended as both a Baptist and Primitive Methodist chapel as is evident from the date stone. The building is in the form of a narrow gabled front, with round arched doorway and fanlight.

It is said this is the smallest galleried chapel of worship in England, being 24ft long and 13ft 6″ wide. It is recorded that the building was finished 18 inches shorter in width than originally planned. It is also understood the builder made up for the mistake by adding the two galleries which face each other. Those who have conducted worship assure me that worshippers can shake hands with those in the other gallery.

The chapel was used by both Baptists and Primitives but after thirty years the Baptists took it over paying a peppercorn rent of £1 per year to the original founder’s son.

The reasons for the Primitives withdrawal has not been discovered but the nearby village of Rippingale became the centre of Primitive Methodist activity in the area. On the death of the founder’s son in 1932 the chapel was put up for sale, and after an argument and subsequent withdrawal from the sale, the people of  Haconby raised the price of £50 to buy the building.