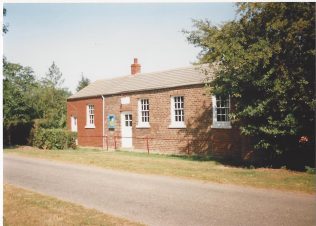 A second chapel in the Market Rasen circuit is dated 1855. It was twice enlarged and a Sunday school was added in 1935. It closed in 2004.

Thomas Kendall writes in the Primitive Methodist Magazine of May 1855:

“On Sundays, March 25th, and April 1st, 1855, this neat sanctuary was opened by Messrs. W. Sanderson and J. Hollingsworth, both of Kirton. The congregations were large, the sermons delivered produced a good effect, and the collections were highly satisfactory. At this place for near twenty years we have had a small society, and services conducted in a room kindly lent by the late Mr. W. Bacon. During the last twelve months our labours have been crowned with success, and the society has been nearly doubled. The room becoming too small, we found it necessary to enlarge our borders. Mr. R. Smith, one of our members, kindly gave us a plot of ground.

A number of trustees were obtained, plans and specifications were drawn by Messrs. J. and J. Benton, Grimsby, and a neat little chapel has been erected, capable of holding a hundred persons. It is 26 feet 8 inches, by 18 feet 6 indies without. It is covered with good blue slate, has two windows on each side, a rising elevation of six pews, and the floor is boarded. The pulpit, seats, window frames, and hatrailing are all well stained and varnished, and the outside work is well painted.

We hereby tender our thanks to Mr. R. Smith, for the land ; to Messrs. Morris and Smith, solicitors, for making the conveyance free of charge, except stamp and parchment; to Miss A. Mouncey, for the pulpit cushion; to Mrs. J. Bacon, for £4/4/1. ; Mrs. W. Bacon, £5 ; to Mrs. A. Hyde, £5/13/7 ; Mr. G. Clark, £5/16/6. ; Mr. J. Phillipson, £3., and to others whose names we have not space to mention. The cost of the chapel will be about £77, toward which we raised £37., and we have borrowed on a note £40 at 4 per cent., so that the trustees are placed in very comfortable circumstances. We have let all the sittings, which speaks well for increasing prosperity. Peace is in our borders, and we are uniting our efforts for the conversion of souls. Our circuit’s increase for the year is thirty five. May many more be brought to a knowledge of the truth, is the prayer of yours in Christ, Thomas Kendall.”

On Google Street View in 2011 it is still there and looked after, although its use is uncertain.