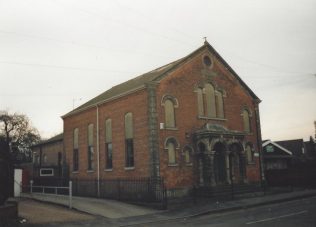 Laceby Primitive Methodist society dates from 1837. A chapel measuring 36′ x 23′ was opened in 1838 when the society paid £21 for 100 sq.yards. Thanks were due to Mr Robert Markham for his unwearied exertions. Opening speakers included Messrs King, Speed, Knowles & FN Jersey, who described the opening in the Primitive Methodist magazine.  Does the building still exist?

The Caistor Road chapel in the picture was built in 1877. The 1878 Primitive Methodist magazine contains a note of the opening of the new Primitive Methodist chapel at Laceby in the Grimsby Second circuit. “Our old friend, Councillor Ellis of Grimsby bought some property in the place and at once offered an excellent site to the friends.” The property cost around £1,100 of which half had been raised.

The chapel served until 1955.  After closure it became a Youth Centre. Google Street View in 2010 shows it as the Scout HQ.