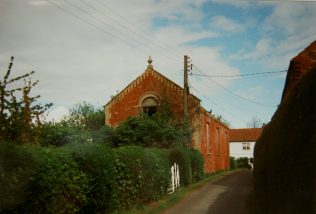 It was sold by 1947 and at the time of Keith Guyler’s photograph in 1995 was derelict. There is a bungalow on the site on Google Street View in 2009, although it is not clear whether the bungalow incorporates any of the former chapel. It is called The Old Chapel so it probably does.