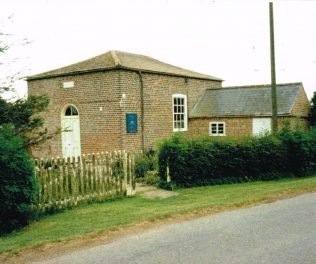 Moulton Seas End Primitive Methodist chapel dates from 1835 and served until 1994.  It closed apparently because the front was unsafe. It was subsequently sold and converted to use as a house. The congregation continued to hold monthly united services in the former Anglican Mission Hall.

Above the round-headed doorway with paired doors is a rectangular date tablet which is no longer easily readable but was painted ‘Primitive Methodist 1835’.

It is a grade 2 Listed Building.

There is an account by James Lucas in the Primitive Methodist magazine of the opening of the chapel on 12th and 14th June 1835. The foundation stone had been laid only a month earlier in May 1835: Mrs Brown, “a benevolent lady” laid the first stone. The month between laying the foundation stone and opening the chapel is informative in itself.