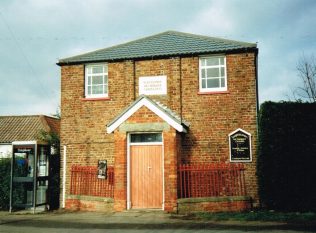 The notes with Keith Guyler’s picture of Northlands Primitive Methodist chapel tell us is its Ordnance Survey grid reference, its opening date (1837) and a text from Samuel 1 chapter 7 verse 12: ‘Hitherto hath the Lord helped us.’.

What he doesn’t tell us is the significance of the text: in fact it is inscribed on the date tablet over the door of the chapel.

Northlands is a hamlet in the parish of Sibsey. The Society was formed c.1820 and at first met in a private chapel built by one of the members. In the 1837 Primitive Methodist magazine I Broadbent tells us that after using for 17 years a mud & stud chapel  1 of the members built on his own land and after a struggle to obtain land, a new chapel had been erected with a gallery at one end. Thanks were due to Mr Pickering for his kindness and to friends who came forward to carry materials. The chapel which held 182 people, measured 21’6″ (w) x 31’6″ (l) x 16’6″ (h).

Speakers at the opening on Friday, Sunday and Monday  26th, 28th & 29th May 1837 included W Paddison and I Broadbent.

The chapel closed in 2006 and was offered for sale in 2013 with planning permission for conversion to a 2 or 3 bedroomed house. It would have cost you £59,950. Has it been converted yet?